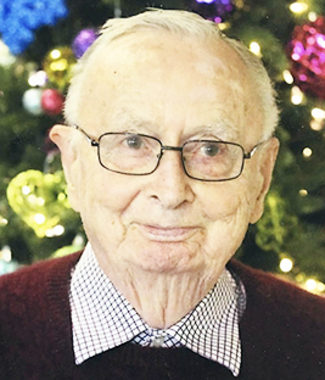 Back to William's story

Greenville, SC. - William Aloysius O'Brien, known as Willie in Ireland and Bill in the United States, died Tuesday, January 28, 2020, in Greenville, South Carolina. He was born in Stoneyford, Ireland, on February 6, 1928, the second of the late Agnes and Timothy O'Brien's five sons. He attended boarding school at Roscrea and received his MD from University College Dublin. He worked as a physician in the Royal Australian Navy and in London, England. In 1958, he married Margaret "Peggy" Daly in Dublin. Soon after, they moved to Iowa City, Iowa, where he did his residency at the University of Iowa School of Medicine. After a year at the University of Wisconsin School of Medicine, he established a private practice as a radiologist in Presque Isle, Maine. Medicine fascinated him, and he introduced many new medical procedures and technologies into northern Maine and parts of New Brunswick, Canada including radiation therapy, computed tomography scanning, and nuclear magnetic resonance scanning. He and his wife created a beautiful home in Maine, centered around their four children and an active social life. Adapting completely to the region, he learned to ski, sail, camp, and hunt, and he was a lifelong golfer and fisherman. He provided service to the community as a leader in the Boy Scouts of America, as a member of the board of the Mark and Emily Turner Memorial Library, in various roles for Saint Mary's Parish, and as a donor to many causes. He read constantly, particularly in history, traveled the world, collected art, enthusiastically followed sports, gardened ardently, and had a true passion for photography. With his wife, he retired to Callawassie Island, SC, where they golfed frequently and enjoyed many visits from children and grandchildren. He is survived by his four children, Geraldine, David, Gavin, and Timothy; eight grandchildren; and his brother, Kevin O'Brien and his wife, Dorcas. He was preceded in death by his wife, Margaret and his brothers, Brian O'Brien, Donal O'Brien, and Conor O'Brien. The funeral Mass will be celebrated at 12:00 p.m. on Friday, February 7, 2020, at St. Mary's Catholic Church in Greenville, SC, followed by a committal in the St. Mary's Columbarium. In lieu of flowers, donations can be made to Mark & Emily Turner Memorial Library Charitable Trust, 39 2nd Street, Presque Isle, Maine 04769. Condolences may be made to the family by visiting thomasmcafee.com
Published on January 31, 2020
To send flowers to the family of William Aloysius O'Brien, please visit Tribute Store. Send flowers
in memory of William