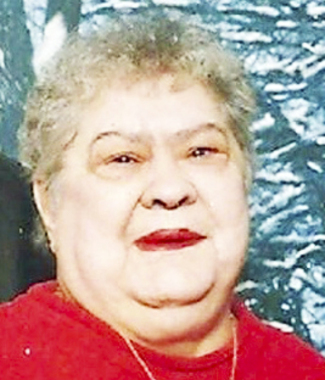 Back to Vera's story

Easton - Vera M. Driscoll, 81, wife of the late Melvin A. Driscoll, passed away Monday morning January 6, 2020 at her Easton home, following a brief illness. She was born November 1, 1938 in Easton, the daughter of Fred and Velma (Harmon) Condon.
She attended Easton schools and was married to Melvin A. Driscoll on December 20, 1956. Vera was a dedicated homemaker and also worked seasonally for several area farmers, and was a member of the Pine Tree Baptist Church, Easton.
In addition to her parents, Vera was predeceased by her husband Melvin; a son James Driscoll; three brothers, Fred, Ricky, Claude "Cubby" Condon; four sisters, Gloria Condon, Rita Dorsey, Ellen Tarbox, Leona Murphy.
She is survived by one son and daughter-in-law, Steven and Cathy Condon of Fayetteville, NC; one daughter, Laurie Driscoll and her companion Jeff Drumgool of Ash Fork, Arizona; two brothers and sisters-in-law, Clifford and Linda Condon, Roger and Jackie Condon, all of Easton; two sisters, Barbara Mersereau of Connecticut, Brenda Bell of Bradley; five grandchildren, Angela Davilla of Georgia, Amy Fortner and Amanda Rankins, both of Mobile, Alabama, Nathan Driscoll and Nicole Farrow, both of Presque Isle; six great grandchildren, Mariah, Logan, Ian, Missy, Leah and Aaliyah; several nieces and nephews, including special nieces, Jeannie Murphy of Easton, Hattie Turcotte, Penny Graham and her husband Steve, all of Fort Fairfield, Terry Mersereau of Enfield, Connecticut.
A graveside service will be conducted later in the spring at Pine Tree Cemetery, Easton. Those who wish may contribute in memory of Mrs. Driscoll to the American Cancer Society, New England Division, One Bowdoin Mill Island, Suite 300, Topsham, Maine 04086. Arrangements have been entrusted to the Giberson-Dorsey Funeral Home and Cremation Service, 144 Main Street, Fort Fairfield.
Online condolences may be expressed at
gibersondorseyfuneralhome.com
Published on January 6, 2020
To send flowers to the family of Vera M. Driscoll, please visit Tribute Store.

Send flowers
in memory of Vera

GLORIA AND DAVE McCLEARY
WE WILL ALWAY MISS AND LOVE YOU AND I WILL ALWAY REMEMBER US PLAYING CARDS WITH YOU AND UNCLE MEL....YOU BOTH WILL ALWAY BE IN MY HEART LOVE YOU
Amy Fortner
My sweet and beautiful Grandmother: I’m honestly heart broken beyond words. My heart is shattered and life turned upside down. Loosing you, my life won’t be the same. When I had to call you and tell you it was okay to go to heaven that we would be okay was extremely difficult but I knew you were holding on to hear the family tell you we would all be okay and how much we love you! Loosing you on my 33rd birthday was very hard but I know in my heart you are now celebrating your new life in heaven, a life where you a healed from all pain, you are whole again, your with Grandpa and Uncle Jim, your with Our Heavenly Father Jesus Christ. I wish I could say I’m rejoicing but I’m honestly h...urt, I miss you so much! I’m great full your no longer suffering and your where you wanted to be but life as we knew it won’t ever be the same. I will forever hold your life, our memories together in my heart forever! I promise to always show your great grand daughter Leia photos of you and always tell her stories of your life. I will never let your memory go away. I will live everyday to make you proud of me. I could only pray to be even half the woman you showed me how to be growing up until we moved away. I know in my heart Grandpa and Uncle Jim met you at the beautiful gates of heaven. I hope and pray you give me sign down here from heaven that you are okay and happy now. I love you and will miss you forever!! Hold a place in heaven for me, until we see each other again. Go soar high on that mountain! You’ve gained your wings. I love you and miss you so so very much my beautiful Grandma!!! ❤️ Always, your Grand daughter AmyRead more
Nicole Driscoll Farrow
Gram, I dont know what to say other than you were my rock after daddy passed away. I will miss our Thelma and Louise days very much. My heart hurts so much knowing that I cant call you or go see you and take you out town. I know Gramp and Dad were there to meet you at heavens gates. Lord rest your beautiful soul.
Love Always,
Your Granddaughter ❤
View all