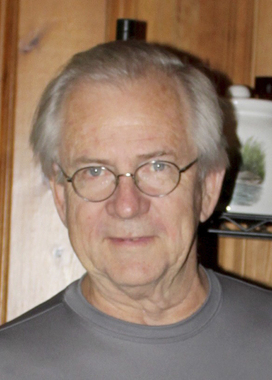 Back to Norman's story

Fort Myers - Norman Palmer Swales died on October 11, 2019, at his home in Fort Myers, Florida. Norman was born in Woodstock, New Brunswick on June 2, 1948, and grew up in Northern Maine.
He graduated from Houlton High School in 1966, and headed south to Ithaca, New York, where he graduated with a B.S. degree in Electrical Engineering from Cornell University in 1970. After graduation, Norman joined RCA in Palm Beach Gardens, Florida, where he was responsible for their Series 400 Microprocessor and COSMAC LSI logic design, an early phase of computer development. His team developed the COSMAC microprocessor (known as an integrated circuit or computer chip) which became the cornerstone of almost every technical device in use today. He moved to Harris Corporation where he was promoted to Director of Hardware Development. He received his MBA from the University of Florida while at Harris. He moved to California in the late 80's and worked on many computer and telephone innovations at Unisys and NET. He started Selaws Technology Inc. in 2000, and worked with General Dynamics. He semi-retired in 2005, and moved to Fort Myers, Florida.
Norman was at the birth of the modern technological world and integral part of the electronic revolution that is central to our lives today. He was a visionary and had a knack for making the impossible happen. Norman was especially proud of his work on the team that designed the radio carried aboard the two Voyager space crafts. Voyager One is now the only man-made craft traveling in interstellar space. It's radio sent back mankind's first close up pictures of the outer most planets resulting in many important scientific discoveries.
After retiring, he returned to his roots and maintained his family camp on East Grand Lake in Orient, Maine, where he would summer with his wife and family. He felt the area grounded him and he never lost his love of nature. He enjoyed working in the woods and repairing 'the camp'. He and his wife took many RV trailer camping expeditions and his stories of their adventures were famous, both in Florida and Maine. His nickname in Maine was aptly 'Norman Long Story'. He also enjoyed playing golf, bridge, yard work, doing crossword puzzles and especially happy hour. He was a great cook and excellent baker. He believed butter could make anything better. His crème brulee, baklava and key lime pie were favorites of friends and neighbors.
Norman leaves his wife and partner of 25 years, Carolee Drotos-Swales; his son, John Swales (Diane) of Boca Raton, Florida; his daughter, Holly Beth Swales Kane (Chris) of Tampa, Florida; his grandchildren, Sean and Chloe Swales and Delaney Kane; his brother, William Swales (Joanne); and nephew, Jimmy Swales of Bangor, Maine.
As was his wish, Norman has been cremated and his ashes will be spread on East Grand Lake next summer. Donations can be made in his name to the Florida State Parks Foundation and/or Hope Hospice, Fort Myers.
Published on October 23, 2019
To plant a tree in memory of Norman Palmer Swales, please visit Tribute Store.

Plant a tree in memory
of Norman

Jim Wayco
Norman was a special friend who was there when you needed a helping hand. Whether it was a project around the house or conversation over a cocktail, Norman was always willing. He is greatly missed.
View all