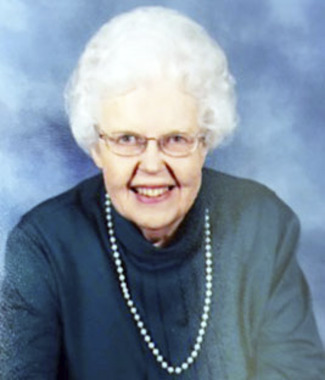 Back to Marilyn's story

New Sweden - Marilyn Norma (Taylor) McDougal, 94, went home to be with her Lord and Saviour, Jesus Christ, on Tuesday, January 7, 2020. Marilyn was born August 16, 1925 to Raymond & Mildred Taylor in Chelsea, Massachusetts.
When she was 1 year old, she moved to New Sweden to live with her maternal grandparents, Eric and Ida Hedman. She grew up in New Sweden with her younger sister, Elaine, and attended Jemtland Grammar School for all 8 lower grades. She graduated from Watertown (MA) High School, and then from New England Baptist Hospital Nursing School in 1947. She worked as an RN at that Boston hospital for 1 year before marrying Almon Ronald McDougal and settling back in New Sweden.
Marilyn and Almon raised 5 children together on their New Sweden farm. She enjoyed baking, reading, knitting, community activities, family/extended family activities and vacation trips, and time at their Madawaska Lake camp. She was baptized at First Baptist Church of New Sweden at the age of 12 and remained a life-long active member there. She also worked part-time as a pediatric RN for 39 years at Cary Memorial Hospital / Cary Medical Center.
She was active on the New Sweden Health Council when the children were in school. After the children were grown, Marilyn became involved in the New Sweden Historical Society and New Sweden Women's Extension group, and enjoyed time with her grandchildren and great-grandchildren. In their retirement, Marilyn and Almon spent several winter months annually in Titusville, Florida.
She was predeceased by Almon in 2014.
Marilyn is survived by her five children: Brian (wife, Lena), Eileen, and Kathy Burden (husband, Steve) of New Sweden; Janice of Caribou, and Barry of Minot, Maine; her grandchildren are Erica McDougal, Joshua Burden (wife, Jessica), Douglas McDougal (wife, Sarah), Matthew Burden (wife, Rachel), and Jessica Ciszewski (husband, Andrew); her great-grandchildren are Josiah, Samuel, and Lydia Burden; Caleb, Tobias, Annika, Zoe, Jude, and Lucia Ciszewski; and Wesley Burden; Marilyn is also survived by her beloved sister, Elaine Jepson; and by many nieces and nephews.
Friends and family are invited to visit from 7 to 9 PM at Lancaster Morgan Funeral Home in Caribou on Friday, January 10th. A funeral service and celebration of Marilyn's life will be on Saturday, January 11th at 11 AM at First Baptist Church of New Sweden. Memorial contributions can be made to First Baptist Church of New Sweden. A graveside service will be at New Sweden cemetery in late spring.
Memories and condolences may be shared at
lancastermorgan.com
Published on January 9, 2020
To send flowers to the family of Marilyn N. (Taylor) McDougal, please visit Tribute Store.

Send flowers
in memory of Marilyn

A place to share condolences and memories.
The guestbook expires on April 08, 2020.