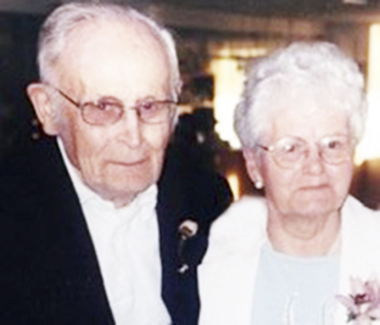 Back to Madeline's story

Perham - Madeline Brissette, 91, passed away November 23, 2019 in Bangor with her daughter, Shirley, at her side. She was born July 8, 1928 in St. Andrew, New Brunswick, Canada, the daughter of Thomas and Eugenie (Levesque) Michaud.
Madeline was a city girl, raised in Grand Falls, New Brunswick, who stated that she would never marry a farmer or milk cows. She eventually changed her mind about marrying a farmer, and married the love of her life, Abel, on November 8, 1949 and they were married for 57 years. She never did change her mind about milking cows after her beloved mother-in-law suggested that she never start. Madeline was talented at nursing cows, pigs, chickens, dogs, gerbils and cats. She was known for her chicken stew and would make the rounds visiting her five children, making her stew with her special ingredients. Madeline lived with her daughter since July, and during this time they shared many memorable moments with Shirley as well as the rest of her children, grandchildren family and extended family. She was a longtime member of the Daughters of Isabella, the Holy Rosary Church in Caribou, and the Friendship Club of Perham.
She is survived by her five children, Shirley Brissette of Holden, Vernon Brissette and wife Jane of Whiting, Patricia Brissette and companion Vlad of Boston, MA, Deborah Zetterman and husband Danny of Waterville, Steve Brissette and wife Ann of Manchester, NH; grandchildren, Rebecca, Megan, Joshua, Elizabeth, Cyrus, Nathan, Tanya, Matthew, Danny, Joseph, and Stacey; thirteen great grandchildren; a special niece, Lynn Lewis of Ohio - who completed her last two years of high school with Madeline and Abel, and spent several winters with Madeline after Abel passed away; her special Perham friends, Gloria Connolly, Patty Doody, Susan and Richard Clark.
In addition to her parents and husband; she was predeceased by her sister, Rita; and a brother.
The family wishes to thank Hospice of Aroostook, and the Aroostook House of Comfort in Presque Isle, and Hospice of Eastern Maine in Bangor. Friends visited with the family from 1pm until 2:45pm at the Mockler Funeral Home, 24 Reservoir Street, Caribou, on Friday, November 29, 2019. A Mass of Christian Burial was celebrated 3pm, Friday, at the Parish of the Precious Blood, Holy Rosary Catholic Church. Those who wish to contribute in memory of Mrs. Brissette may do so through the Holy Rosary Catholic Church, Caribou, the Aroostook House of Comfort, Presque Isle, or any animal shelter.
mocklerfuneralhome.com
Published on November 27, 2019
To plant a tree in memory of Madeline Brissette, please visit Tribute Store.

Plant a tree in memory
of Madeline

A place to share condolences and memories.
The guestbook expires on February 25, 2020.