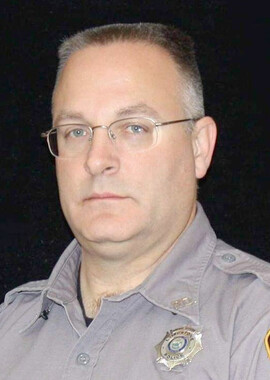 Back to Kenneth's story

Easton - Kenneth S. Oliver III, 50, husband of Tonya L. (Anderson) Oliver, and patrol officer with the Limestone Police Department, passed away unexpectedly, Thursday evening, February 6, 2020 at a Presque Isle healthcare facility. He was born June 10, 1969 in Columbia, SC, the son of Kenneth S. and Rosalie (Farren) Oliver. He was a graduate of the Narraguagus High School, Harrington, Class of 1988, and also attended the University of Maine at Presque Isle. Kenneth was married to Tonya L. Anderson on June 10, 2016. He had been a member of the Limestone Police Department since 2013, served as the Limestone Animal Control Officer, and was also a Transportation Deputy for the Aroostook County Sheriffs Department. Additionally, Ken worked for Dr. Catherine Varnum as a groundskeeper. Kenneth was a life member of the N.R.A., a member of the Kappa Delta Phi Fraternity, Presque Isle, the Fort Fairfield and the Presque Isle Rifle and Pistol Clubs. Mr. Oliver also generously volunteered at the Central Aroostook Humane Society, Presque Isle and had been involved in Martial Arts for over 20 years, achieving the status of Black Belt. He was predeceased by his parents and is survived by his wife, Tonya of Easton; one brother, Ronald Oliver; one niece, Veronica, both of Columbia Falls; father and mother-in-law, Billy and Kathryn Anderson of Prospect; one brother-in-law, Kevin Anderson of Belfast; and many friends in the Law Enforcement and Martial Arts communities. Friends may call Friday, February 14, 2020 from 12:00 noon to 1:00 p.m. at the Celebration Center, 170 Houlton Road, Fort Fairfield, where the funeral service will be conducted at 1:00 p.m. with the Rev. Mark Babin officiating. Interment will be private and take place at a later date. In lieu of flowers, those who wish may contribute in memory of Mr. Oliver to the Central Aroostook Humane Society, 26 Cross Street, Presque Isle, Maine 04769. Envelopes will be available at the service. Arrangements have been entrusted to the Giberson-Dorsey Funeral Home and Cremation Service, 144 Main Street, Fort Fairfield. Online condolences may be expressed at www.gibersondorseyfuneralhome.com
Published on February 9, 2020
To send flowers to the family of Kenneth S. Oliver, please visit Tribute Store.

Send flowers
in memory of Kenneth

A place to share condolences and memories.
The guestbook expires on May 08, 2020.