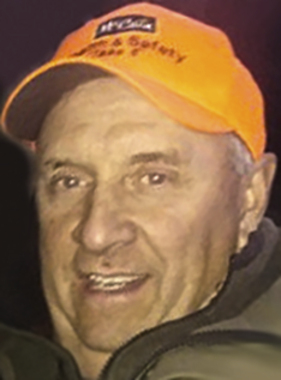 Back to Jerry's story

Washburn - Jerry Sidney Burtt, 60, beloved husband, father and papa, passed away unexpectedly June 1, 2019 in Lewiston with his family by his side. He was born in Fort Fairfield, the son of the late James S. and Audrey M. (Fogg) Burtt.
Jerry was a 1978 graduate of Washburn High School, where he met his high school sweetheart, soul mate and best friend, Gail Bell. Jerry and Gail were married July 16, 1983 and shared nearly 36 years of marriage. Mr. Burtt was employed at McCains in Easton as a field mechanic. He was an avid sportsman, who loved hunting, fishing, four-wheeling - and trips to the North Maine Woods. Jerry enjoyed working and hunting on the family farm, and was a huge fan of Ford Mustangs.
In addition to his wife, Gail, of Washburn, he is survived by two daughters, Stephanie M. Bragg and husband Ryan of Perham, Shanae M. Reed and husband Josh of Caribou, two grandchildren, Cade and Coewan, whom he loved to play with and were his pride and joy, a new expectant grandbaby, two brothers, and four sisters.
At his request there will be no service. Friends who wish to contribute in memory of Jerry may do so c/o Gail Burtt, PO Box 555, Washburn, ME 04786, money received will be used to construct a gathering place in Jerry's favorite spot, the North Maine Woods, in his memory. Arrangements by Mockler Funeral Home, Caribou. www.mocklerfuneralhome.com
Published on June 5, 2019
To plant a tree in memory of Jerry Sidney Burtt, please visit Tribute Store.

Plant a tree in memory
of Jerry

Patricia A vaughn
I went to school with him ,I didn't know him well, but condolences to the family ,I heard great things about him God bless,
Mary McCarthy

Gail, so sorry for your loss. Thoughts and prayers to you and your family.

I was fortunate to have met and knew Jerry , Jerry was a good man , husband and father . He will be deeply missed but never forgotten.Rest In Peace Jerry ! Prayers and Condolences to the Family .

Barton Byers ( Joshua and Megan’s Father )
I was fortunate to have met and knew Jerry , Jerry was a good man , husband and father . He will be deeply missed but never forgotten.Rest In Peace Jerry ! Prayers and Condolences to the Family .
View all