Back to Gerald's story

Houlton - Gerald Scott, 92, died on Thursday, May 23, 2019, at Cary Medical Center after a long battle with his overall health. On Easter Sunday, he fell and broke his hip while he was pressing his "good pants" for Easter dinner and was unable to recover.
Gerald wore many hats. He was Dad to daughters, Sharon and husband Jim Brown, Judy and husband David Cyr, and to his son Gerry and fiancée, Katie Hosford. He was Pa to devoted granddaughters Allison Atkins and husband Josh, Hannah Brown, Renee Knapp and husband Halsey, as well as to a very special great-granddaughter Charlotte. He was Uncle Gerald to many nieces and nephews who saw him as a keeper of family stories. He was Scotty to a legion of Houlton Motors employees and friends. He was predeceased by his parents, eight brothers and sisters and his beloved wife Jean. He leaves behind a special cousin Madalyn Boutilier, and care-giving friends Brenda McLaughlin and Gail Duff.
Gerald proudly served in World War II as a gunner's mate on a light cruiser in the Atlantic. He left school his senior year in order to join the Navy. He earned his high school diploma in 2001 when the Maine State Legislature enacted policy that enabled vets who left school the last semester of their senior year to claim their diplomas. He was so proud to have that diploma and be an official high school graduate. He was quite disappointed, however, when he got his transcript and got a "little b" in band because he was a darned good trumpet player!
Dad spent all of his working years at Houlton Motors, starting as a grease monkey after the war and ending as owner. It was a place for County folk to gather and swap news and occasionally buy a car or a truck. Houlton Motors stories are legendary, growing greater than the reality with every telling. It was always Dad's home away from home, and the friends he cultivated were lifelong. When he retired, he turned his attention to the camp on Drews Lake and made it the welcome place for the whole family.
Dad faced life with a blunt, head-on attitude of "let's get this done." His son gave him one hat with words that fairly summed him up - "Tis Himself".
There will be no visitation. A memorial service will be held 11 AM Tuesday May 28, 2019, at Dunn Funeral Home. A reception to follow immediately after the service for anyone who would like to visit with the family one last time in his most comfortable place, his home at 7 Elm St. in Houlton. All are welcome.
In lieu of flowers gifts in Gerald's memory may be made payable to the Maine Veterans' Cemetery in Caribou in c/o Dunn Funeral Home, 11 Park St., Houlton, ME 04730. He passionately supported services for those who served us. Arrangements in care of Dunn Funeral Home. Online condolences may be expressed on the Tribute Wall at: www.dunnfuneral.com
Published on May 24, 2019
To plant a tree in memory of Gerald David Scott Sr., please visit Tribute Store. Plant a tree in memory
of Gerald 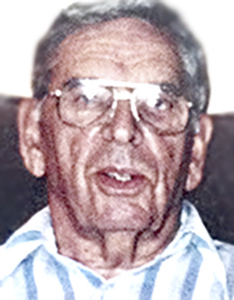