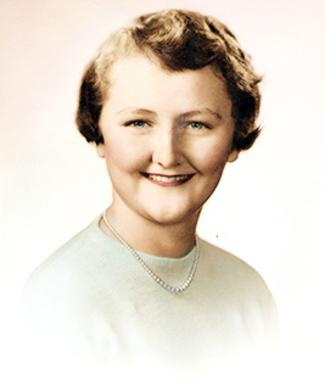 Washburn - Donna Rae Foote (Stairs) was born on January 30, 1938 in Washburn, Maine. She was the only child of Anna Lillian Myshrall and Harry Ivan Stairs.
Donna was an active part of the Washburn community growing up. She was educated in Washburn and graduated from high school in 1955. She was employed with the New England Telephone and Telegraph Company in Presque Isle. She married Donald Charles Foote, an Airman stationed at Loring Air Force Base in Limestone, on April 7, 1956 at the United Methodist Church. They lived in Washburn after marrying.
She attended and completed a cosmetology program in Canada and became a hairdresser. She owned and operated the Washburn Coffee Shop for a number of years. Donna and her family moved to Orlando, Florida where she owned and operated a hair salon. Later in life, she enjoyed traveling back and forth from Maine to Florida. Her favorite mode of travel was in a camper.
Donna was a very kind, generous, and spiritual woman who helped others in need throughout her lifetime. She was smart and very funny and enjoyed laughing and recalling stories. She will be remembered for her great sense of humor and the moments of laughter shared with family and friends. She was a wonderful cook and a great dancer. Those that had the privilege of spending time with her were truly blessed.
She is preceded in death by her devoted husband Don; her mother and father; and her beloved grandparents, Henry and Maggie Myshrall.
She is survived by a loving son and daughter-in-law, Harry Allan and Brenda Foote of Sierra Vista, Arizona; two grandsons: Joel Allan Foote of Tucson, Arizona and Erik James Foote of Sierra Vista, Arizona as well as three great-grandchildren: Henry Allan and Nadia Marie Foote of Los Angeles, California, and Bailey Mae Foote of Sierra Vista, Arizona.
Donna left us on November 25, 2019. She was and is loved and will be deeply missed by her family. Now she is in heaven and she has wings.
Published on December 2, 2019
To plant a tree in memory of Donna Rae (Stairs) Foote, please visit Tribute Store.

Plant a tree in memory
of Donna