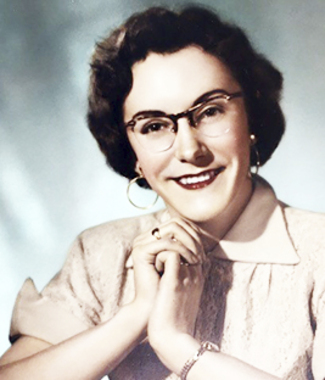 Mapleton - Donna Gail Bartley Carter, much to her surprise, survived 86 years before she passed away on Saturday, March 14, 2020, in Presque Isle. She was born in Presque Isle on February 14, 1934, the daughter of Ashton and Arthuretta (Kierstead) Bartley.
She was an avid reader, artist, and poet, with a humorous flair for words.
She is survived by her husband of 67 years, Winston Carter; her children and their spouses: Kelly and Patricia Carter, Devon and Gail Carter, and Mickey Carter; grandchildren and their spouses: Andrew and Courtney Carter, Heather Carter, Gwendolyn and Aaron Kovacik, and Virginia and Mickey Moore; great-grandchildren: Madeline, Callen and Bryce Carter; siblings Irene Tweedie, Dolores Beals, Sharon Madore, Cary Bartley, and Brenda Saucier.
Donna was predeceased by her parents, sisters Gertrude Hawkins, Theora Porter, Z. Joyce Duncan, Prudence Gray, Claudette Brewer, and brothers Albert, Wayne and Ray Bartley.
In lieu of flowers, donations may be made in Donna's memory to:
Dana-Farber Cancer Institute - P.O. Box 849168, Boston, Massachusetts 02284-9168
The Mark and Emily Turner Library - 39 2nd Street, Presque Isle, Maine 04769
Wintergreen Arts Center - 149 Street # 2606, Presque Isle, Maine 04769
There will be no services at this time, but there will be a family gathering at a later date.
Memories and condolences may be shared with the family at
duncan-graves.com
Published on March 23, 2020
To send flowers to the family of Donna Gail Bartley Carter, please visit Tribute Store.

A place to share condolences and memories.
The guestbook expires on June 21, 2020.